A total solar eclipse is not a phenomenon that everyone gets to experience. The moon moves with amazing precision in front of the sun and in just a few moments, day changes to night, birds stop chirping, animals become eerily silent and the temperature drops significantly. And the culmination is the ‘diamond ring’ that is formed around the moon.

On 14 November 2012, a lunar path will cast a 120km wide shadow starting from early morning from Arnhem in northern Australia and move eastward to Cape York and Queensland to reach Cairns at 6:50am.

The eclipse will actually start approximately an hour before the total solar eclipse. This phase before totality is known as a partial eclipse phase which occurs before the moon covers the sun. In the last few seconds before totality, the ‘diamond ring’ is something to look out for. 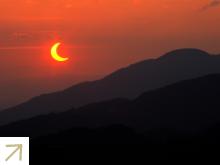 The diamond ring occurs when the sun’s rays pass through the narrow canyons on the lunar surface. Darkness descends and only the solar corona becomes visible. The solar corona is extremely hot atmosphere and outbreaks that follow the magnetic belts millions of kilometres into space. Two minutes later it’s over, and the spectacular sight will be seen in reverse order. First, the diamond ring and gradually increasing light in the next hour during the partial eclipse that follows totality.

One of the most important things to remember about a solar eclipse is protecting your eyes. Even a second of unprotected exposure even when the sun is partially covered by the moon can cause permanent damage to the retina. Albatros Travel will provide specially designed eclipse viewing glasses for guests. Welding goggles can also be used but they are cumbersome and can only be purchased in specialist shops.

Please note that telescopes cannot be used to view the eclipse as it is not equipped with filters on the lenses. The simplest way of viewing an eclipse is using a pinhole projector where the shadow of the sun is projected on a flat surface.

Find out more about what to expect during a total solar eclipse.

Tips for viewing a solar eclipse

Try to spot a shadow band before and after totality. These are shadow effects visible on flat surfaces that aren’t very dark. Try to keep an eye out for them as they can be quite difficult to spot.

Bright, red dots known as prominences will form around the moon. Use binoculars to spot these dots.

You can safely view a solar eclipse by making a pinhole projector which basically means projecting the image of the eclipse on something else and looking at that.

Taking pictures of a solar eclipse

If you are a photographer, trying to capture this astronomical event is a must. Appropriate equipment such as a digital SLR camera, a powerful lens (300mm), a solid tripod and a lens filter will be sufficient. The most widely used filter is an aluminium-coated polyester film, which often goes under the name Mylar filter. The filter should be placed so that the disc is covered and ready to be removed during the total eclipse. Use a tripod that is easily adjustable so you can follow the sun in its orbit. Remember to test your equipment, aperture and shutter settings before the big day.

Please note that Albatros Travel assumes no responsibility for visibility or the weather during the eclipse.